× This item is no longer available for purchase.
Active

BACK ON THE MARKET! Twin diesel stern drives 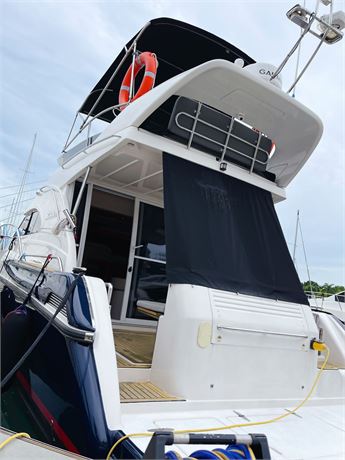 Payment Instructions
Please note: The buyer's premium is only due if you pay by credit card. If bank transfer no buyer's premium is payable. Typically, upon purchase of a boat, a letter of intent is signed and presented to the owner. Upon agreement by the owner a deposit of 10% is payable by bank transfer to BASCO's Client Account. Settlement terms is as per the Letter of Intent and Memorandum of Agreement. Please contact us to find out more.
Details
Description

Rare 2 cabin flybridge with diesel engines now on the market.  Current owner has spent thousands upgrading the boat in the last 12-months.  Arrange a viewing now, this one won't be on the market long.

Powered by twin diesel stern drives, giving high top speed, excellent and economic handling, and a smooth and silent ride. High quality woodwork was used throughout the boat interior. The designer of Nidelv39F, Trond Huseklepp, has been working 30 years in the Norwegian boat business, and is a well known boat designer.

The Nidelv 39 which was originally designed by Trond Huseklepp of Norway, commissioned the yard in China to built the prototype and did the test drives under different circumstances during 6 months prior to production.

This experience resulted in the Nidelv 39F, which offers a high standard comfort, space and performance. Statement from the boat press: "The most sporty, speedy and economic fly-bridge yacht you ever saw".

This particular Nidelv 39 arrived in Singapore back in December 2013. Now known as APRIL PEARL, she is back in the market in 2021.

There are no questions for this listing.